Being based in St Leonards, I will keep this page updated with any news from the area in case anyone is visiting.

**PAGE IN PROGRESS, BUT PLEASE FEEL FREE TO CONTACT ME WITH ANY INFORMATION, ADDITIONS, OMISSIONS ETC**

There are so many writers and street artists with a Hastings connection – from local taggers to household names of the art world….. Everyone loves Hastings!

Aaron Hosannah
During 2 short years running Hastings paint shop and arts centre Inspire, everyone soon got to know Aaron. When he wasn’t running youth and community painting and drawing classes, he was out in town painting pieces and commissioned murals.

Above
During his visit to London in Summer 2013, a Hastings based friend of Above managed to drag him down for a chill beside the seaside. During his 4 days in town, he treated us to several of his beautiful arrows and hundreds of stickers, from the centre of St Leonards to the far end of Hastings Old Town.

AD
When he wasn’t busy running classes with Aaron at Inspire, AD’s pieces could often be found around town, often featuring birds and local scenes.

Anit One
Writer with Ice Cream Terror Crew, alongside Word To Mother and Peps.

Banksy
If rumours are to be believed, St Leonards had the pleasure of a visit from Mr B in August 2010, whilst he was in town helping to celebrate the 40th birthday of a certain Mr Eine, resulting in the Tesco inspired piece that can still be seen behind Perspex today, 3 years on. As expected, Team Robbo made an appearance, but only after it had been covered. After cleaning the Perspex off, the council at least had the courtesy to leave a TR tag intact above the piece – something for everyone!

Emily & Clive Baxter
I can find nothing about the Baxters, locally or online.

Bobas
Hastings’ serial tagger and writer with a couple of really nice styles in his bag of tricks, Bobas can be found all over Hastings, St Leonards & Bexhill.

D*Face
A number of D*Face stickers have been spotted in town over the Summer, along with rumours of him paying us a visit in Summer 2013.

DS
Big name stencil artist DS made a trip into town in September 2012, leaving not just one of his intricate, multi-layered stencil pieces, but one which created a thoughtfully conceived addition to the Banksy piece.
DS – Bulldozer Baby 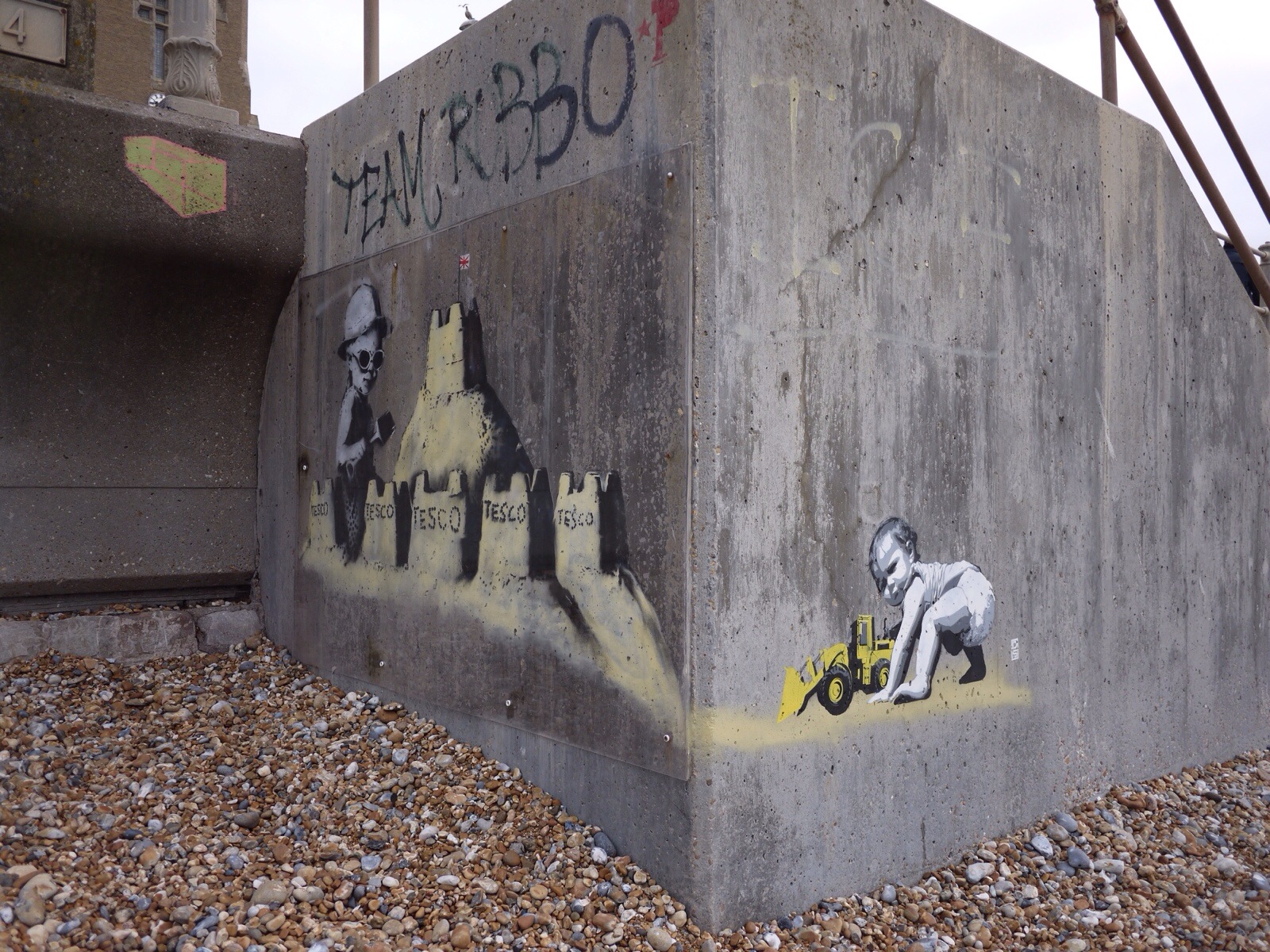 Duzr
Little is known about this write from local BM crew.

Eine
Ben ‘Eine’ Flynn is arguably one of Hastings’ biggest exports, after his rise to popularity after David Cameron presented one of hos pieces to Obama on his first state visit. There are still a number of large Eine pieces in town, as well as lots of individual letters on shop shutters.
EINE – Heart (April 2012) 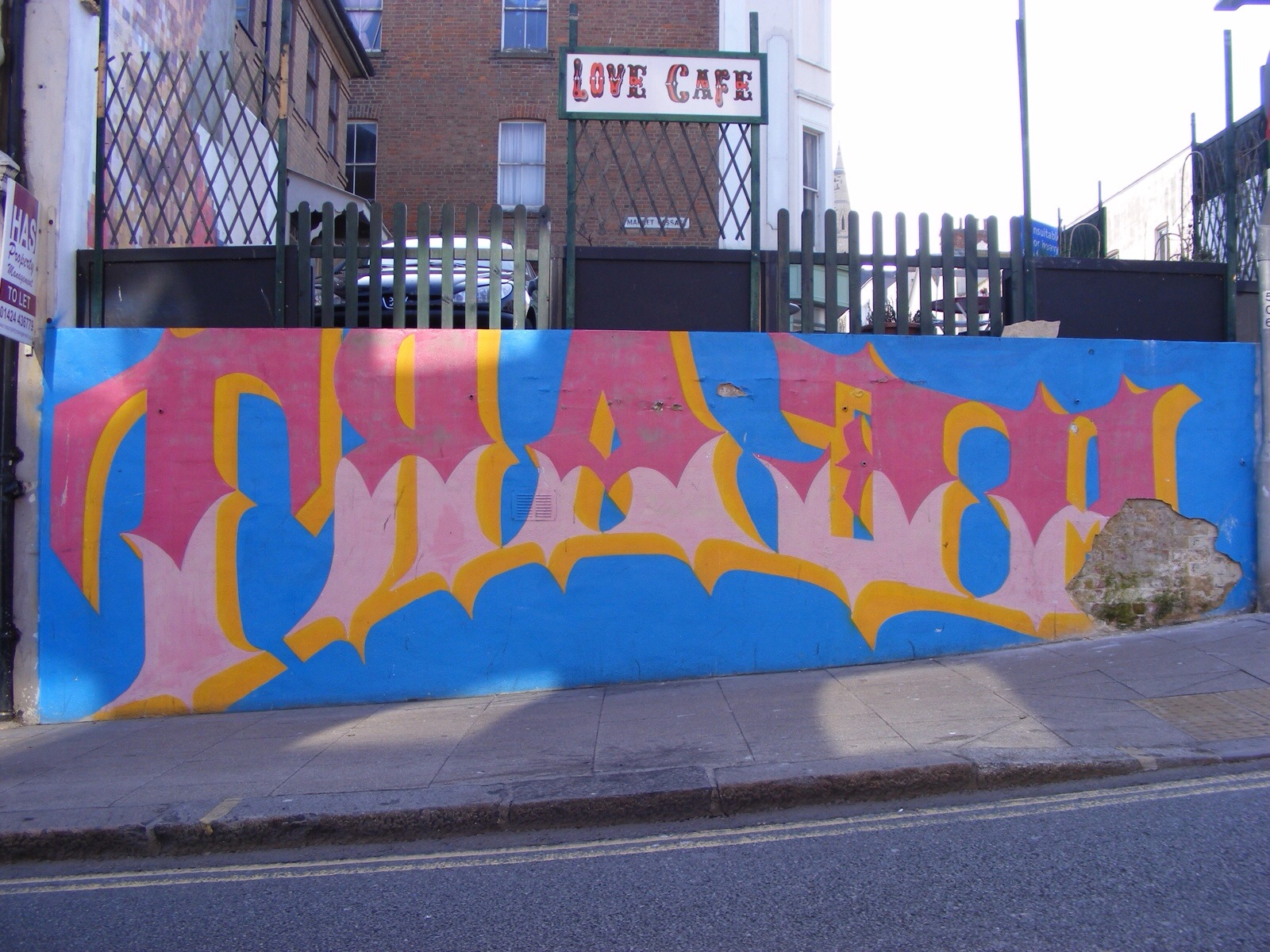 HAS
Very little is known about Has, serial tagger a

ICT
Work from Hastings crew ICT (Ice Cream Terror) could often be found around town from c. 2002-2007. The crew included Word To Mother, Peps & Anit One.

Anthony Lister
International artist Anthony Lister has been described as “Australia’s best contemporary artist”. His work can be found in galleries and streets the world over, so to find his work

Pegasus
In Pegasus’ typical style, a naked Prince Harry appeared in Hastings Ols Town in early 2013. I asked Pegasus how he ended up in Hastings?
“I have family down there so wanted to leave my mark. I’m far from finished… Haven’t seen the last of me. Plus I love Hastings… Would love to do something more permanent… In good weather :)”
Twitter @pegasustreet 11/02/14

Peps
Writer from Ice Cream Terror crew, whose pieces with and without Word To Mother have sadly all but disappeared from the streets of Hastings over time.

Rowan Newton
London-based Painter Rowan Newton’s most recognisable work (that I am familiar with) is beautiful portraits filled with a stunning, bright palette of abstract splashes of colour. When some stickers of his turned up in Hastings around Christmas 2013, they were easily recognisable, even whilst passing them quickly in the car!
I asked Rowan about Hastings: “I was there just last week! I pass through quite a bit throughout the year. There’s a place I like to chill not too far away from Hastings.” @RowanNewton 17/03/14
Rowan Newton sticker in Hastings Old Town, Jan’14 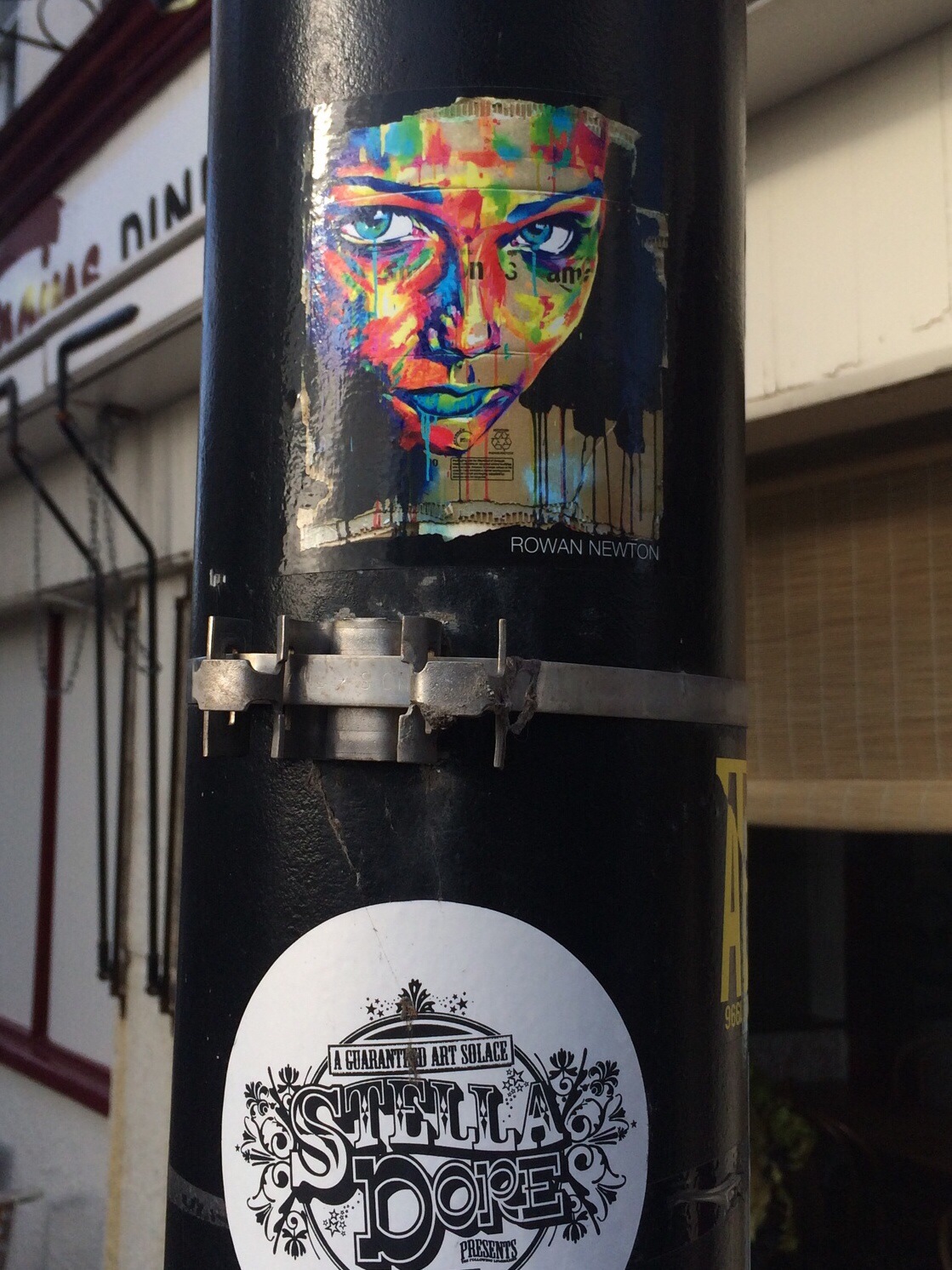 Scrabbleman
For several months from April 2012, a series of plaques were installed in St Leonards and Hastings, by an anonymous artist. Consisting of words made of scrabble tiles embedded in a plaster or resin base, the collection soon numbered more than 20.

Stewy
Stewy’s lift-sized animal and cult celebrity stencils can be found in streets across the country. His most recent visit to Hastings in Feb’14
LINKS; Stewy Homepage

Toasters
According to the short film Toasters Everywhere,

Toby
Toby’s paste-ups can often be found in Hastings, but he has shown his work internationally.
My Flickr gallery of Toby’s work in Hastings

Word To Mother
I first met Mother through a mate in 2005 when he was painting with local crew ICT, alongside Peps & Anit One.

Zeroh
Moth designs with Moose.
Commissioned to create posters for the Pier Hub at the old skating rink in Feb’14.